Majuli is the the biggest river island in the world and is located on the river Brahmaputra in Assam and is formed by Brahmaputra in the south and the Kherkutia Xuti joined by the river Subansiri in the north. Making you feel at peace with nature, it is home to many migratory birds. Located 1100 km away from the mouth of the Brahmaputra, Majuli had an area of 1256 sq km in 1991 but due to soil erosion, it has now reduced to 875 sq km. 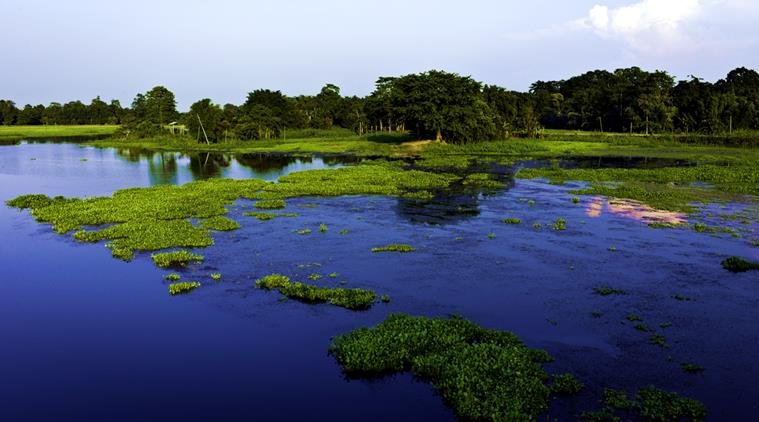 “The island of Majuli is said to be the largest river island in the world. It is situation midst the river Brahmaputra, near Jorhat, in Assam, India. The island is around 200 kms in circumference but substantial river erosion is quite serious. The island is home to tribals such as the Mishing (also Missing) people who prefer living on the banks of the river. They are predominantly fisher people. Majuli island is also the home to some 22 Sattras (Hindu monasteries) mostly dedicated to the Hindu God, Vishnu. Majuli is dotted with lagoons, as depicted in this photograph. The water hyacinth, also in this photograph, is present too and in parts its proliferation is pernicious. Rice is a popular crop. The island of Majuli is a World Heritage Site and is beginning to attract a steady flow of tourists. The photograph was taken during late afternoon.”

Majuli has been the cultural capital of the Assamese civilization since the 16th century and its main village, Naghmar, hosts all the important events, festivals and prayers. A good learning center for neo-Vaishnavite philosophy, there are 22 Vaishnava Satras in the city, the first of which was established in the 15th century by Sankaradeva, the father of Assamese culture. These attract a lot of tourists.

The festivals of Majuli are another crowd puller. The Raas Purnima, that takes place in the Hindu month Kartik showcases a dance performance based on Lord Krishna’s life and the Majuli festival during which special events are organized, sees several cultural troupes from all over Assam come to the town. The Paal Naam at the end of Autumn and the Bathow Puja where Lord Shiva is worshipped are some other exciting festivals. 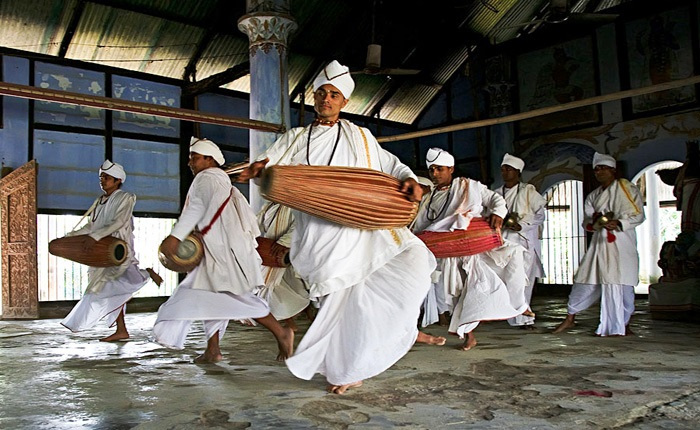 The local languages here are Mishing, Assamese and Deori. Agriculture is the main source of income in the town; around 100 different varieties of rice are grown in Majuli. Komal Saul, a unique type of rice is eaten by locals as a breakfast cereal while the Bora Saul is a sticky brown rice used to make Pitha, a traditional cake. Pottery, handloom, boat-making, fishing and dairying are some of the other important economic activities. Face masks and pottery are a must-buy from Majuli.

Dear All You all have contributed a lot to make our LTC trip to Gangtok-Darjeeling a life time memorable leisure trip. From the very beginning till the arrangements of Transport Bill and all other necessary LTC related documents, your support was mind-blowing.

Bikrom What’s Up? I think all you are busy in handling your routine guest but sorry for dropping a few words of my 11 Days Arunachal, Assam trip experience little bit late. It was really a good trip, overall experiences are Ok and fine but the travel distances in your tour itinerary and in actual it’s little bit differ. We use to travel 6-7 Hrs daily but never feels boring because of it’s scenic beauties and snow laden mountains of Arunachal. We have travelled lots of Hill Stations in India like Himachal, Jammu – Kashmir etc. but the Arunachal Pradesh is quiet unique, actually the people of Arunachal are really very Good, their simplicity and helping attitudes really makes me impressed.

Pranjal Although I have not meet you and never seen you in my life, but I don’t know why I like you so much as a human being? I think it’s because of your hospitality, your politeness and kind co-operation all the time. Although we were unable to go Tawang, but we have really enjoyed a lot in Kaziranga National Park, Bhalukpong, Dirang, Bomdilla and Westbengal and Sikkim.

Dear Mr. Bikrom, hope you are well. this must be a very busy time for you all at traveloearth! thank you very much for your mail and accompanying many nice photos. it was good of you to take the time from your busy schedule to do me this great favour. forgetting to take my camera was a big mistake. if you did not share your pictures with us, we would have had no images of our grand tour, except in our minds! so thank you again. where were the last 3 photos taken? was it in nagaland? they are very lovely. i told megha tai about your mail, photos and message. she said thanks for the pictures and that she will phone you soon.her family were happy to see that she came back from the northeast loo…

Hi all Traveloearthians. Thanks for your nice support from the very beginning. I actually appreciate your prompt response all the times. The vehicle was superb and the driver – OH, no fantastic, he is really a nice guy.

Myself is from Bangalore, by profession I am a doctor and this is my first trip to North East India, especially Gangtok, Pelling and Kalimpong. Thanking you Mr.Dasgupta for the very nice and special arrangements for our trip. Myself and my little family is really become fan of you.

Hello Mr.Gupta. Finally i have reached home after completing my 5 Days trip of Meghalaya & Assam but sorry as i was unable to cover Kaziranga National Park, i have a very strong desire to visit Kaziranga at it’s depth to know and experience the Wild Life there and especially the endangered One Horned World Famous Rhinos. Hope i can cover it in my next visit to Tawang, till then take care you all and keep good work.

I am really thankful to all of you for the very well designed, well planned and memorable trip of Arunachal Pradesh. I have heard a lot in Internet & News papers about Arunachal Pradesh about it’s scenic beauties and all but never dares to plan a trip, but you people have really made it easy and become successful my dream trip, i and my entire family have really enjoyed a lot and i will suggest to my friends and all to visit once in a life Arunachal Pradesh.

Traveloearth – thanks a lot for making it possible to explore the very original view of Nature – Gangtok (Tsango Lake, Lachung etc.) at the age of 70+. May God help all of you for better future & good health. D.K Varma, Mumbai DT: 26th April -2013

Dasgupta Jee Nothing to say a lot as today only I have reached home after a long trip of North East India. Simply I want to say thank you and good wishes for your organizations bright future.