This temple adjoining the palace of the former rulers of Manipur, is a historic centre for Vaisnavites. It is a simple and beautiful structure with gold domes, a paved court and a large, raised congregation hall.The presiding deity in the centre is flanked by idols of Radha Govinda, Balaram and Krishna on one side and Jagannath, Balabhadra and Subhadra on the other.

Kaina – The scared place of Hindus

29 kms. from Imphal. A beautiful hillock, about 921 m. above sea level, Kaina is a sacred place of Hindus. According to legend, Shri Govindajee appeared to His devotee Bheigyachandra, Maharaja of Manipur, in a dream and asked him to build a temple enshrined with His image carved out of a jackfruit tree which was then growing at Kaina. Beautiful hill shrubs and charming natural surroundings give the place a saintly solemnity. Ceremonial dances depicting the devine dream are performed as Ras at the Mandop. Kaina can be reached by bus via Thoubal also

This is a large covered market split into two sections on both sides of the Khwairamband Road. Vegetables, fishes, household utensils & implements and fruits are sold on one side and colourful handloom shawls, phaneks, khudeis, bedsheets on the other. The market is very special in the sense that all the stall holders are women. Not far from here, is a street where beautiful cane baskets and furniture are sold. Other smaller markets are Singjamei, Kongba, Lamlong, Kwakeithel, Heirangkhoithong, Terakeithel, Naoremthong etc

About 6 km. from Imphal, towards the west, in this Zoological Garden at Iroishemba on the Imphal Kangchup Road. Graceful brow-antlered deer, “Sangai” one of the rarest species in the world, can be seen here in sylvan surroundings. A trip to this garden, at the foot of the pine-growing hillocks in the westernmost corner of Lamphelpat is really enjoyable.

48 km. from Imphal. A huge and beautiful stretch of water, this lake is like a miniature inland sea. From the Tourist Bungalow, set atop Sendra island, visitors can get a bird’s eye view of the lake and the life on it, the fisherman and their families who live in neat huts on its shores and who make full use of their watery environment.

They cast their nets on it, rear fish farms in it using nets as floating walls, harvest it for the water chestnut known as Heikak, and even build their houses on the islands of floating weed that dart around the lake.
There are buses and cycle rickshaws to cover the last 3 km. to Sendra. The Tourist Home charges Rs. 10 per bed.

The British and the Indian Army Cemeteries commemorating those who died in the Second World War are serene well-maintained with little stone markers and bronze plaques recording their anguish and sacrifice. These graves are maintained by the Commonwealth War Graves Commission.

8 km. from Imphal on the Indo-Burma Road lies this small hill feature with the relics of an old historic palace, well-planned temples and ceremonial houses amidst pine and jackfruit trees planted symmetrically. Overlooking the Manipur University, Canchipur, it offers a pleasant view of the surroundings.

45 km. from Imphal, Moirang holds an ancient temple of the pre-Hindu deity, Lord Thangjing. Every May, men and women, in gorgeous traditional costumes, sing and dance in honour of the Lord here at the Moirang Lai Haraoba. It was from the village of Moirang, too, that the graceful Khamba-Thoibi dance originated, traditionally celebrated in May. It was in Moirang that the flag of the Indian National Army was first hoisted on Indian soil on April 14, 1944.

There is an INA Museum exhibiting letters, photographs, badges of ranks and other articles associated with this movement. There is also a bronze statue of Netaji in uniform. There are buses which operate from private bus station of Waheng Leikai junction to Moirang from 8 a.m. to 6 p.m. Fare: Rs. 10/- . Journey time is around 1 hr.

110 km. from Imphal. This border town is located on the Indo-Burma Road. A commercial town attracting a large number of people from neighbouring places. It is only 5 km. from Tamu town, its Burmese counterpart. Tamu depicts a total change in the attire and eating habits of the people and in the architecture of its buildings.

At an altitude of 921 m., 16 km. from Imphal to the west is a hill resort on the hills overlooking Manipur Valley. The scenery is picturesque. It is also a mountain pass on the road to Tamenglong. There is an inspection Bungalow here. There is a nice artificial lake called Singda Dam. It is now a multipurpose project.

40 km. from Imphal. A charming resort on the western fringes of the Loktak Lake, to the south of Imphal. It is joined to the mainland by a low causeway.

36 km. from Imphal. Situated on the Indo-Burma Road, this is a place of greatest historic importance. It was here that Major General Paona Brajabashi, one of the great warriors of Manipur, proved his velour against the superior force of the invading British Army in 1891. The hillock of the foot of which he laid down his life in defence of his motherland, is reminiscent of the past heroic deeds of Manipuri warriors. A war memorial on the top of this scenic hill feature, adds charm to this heroic site. Khongjom day is celebrated as a State Holiday on every year on April 23.

This tall Minar of Bir Tikendrajit Park in the heart of the capital commemorates the indomitable spirit of Manipur martyrs who sacrificed their lives while fighting against the British in 1891.

This interesting museum near the Pologround has fairly good display of Manipur’s heritage and a collection of portraits of Manipur’s former rulers. Items of special interest are costumes, arms and weapons, relics and historical documents.

The Orchid Yard of the Forest Department, on National Highway No 39, about 7 km. from Imphal is another place of interest. More than 110 varieties of Orchids, including several rare species, are grown here. Peak season is April-May.

27 km towards east of Imphal is the ancient Scheduled Caste village of Andro, there is one Cultural Complex established by the Mutua Museum, Imphal. It consists of potteries of the North Eastern Region of India. There is a ‘Doll-House’ where dolls of 29 recognised tribes of Manipur (both male and female) are in display.

53 kms. from Imphal and on the fringes of Loktak Lake, this is the last natural habitat of the marsh-dwelling brow-antlered deer of Manipur called “Sangai”.

Sekta Mound locally known as the “SEKTA KEI” is a protected Archaeological Site. The site is located at Sekta village, about 16 km. from Imphal on the Imphal-Ukhrul Road. It is a site where practice of secondary burial was discovered. The site was jointly excavated by the Archaeological Survey of India and the State Archaeology, Manipur and is preserved as a Living Museum.

Some of the most Exciting Tour of Manipur: 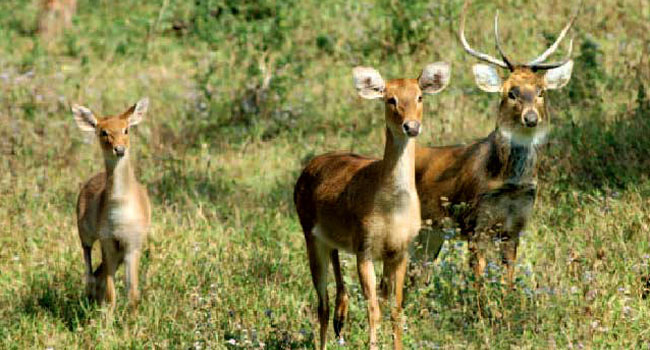 Visit Loktak Lake. Loktak Lake is the largest freshwater lake in North- Eastern India, also called the only Floating lake in the world due to the floating phumdis (heterogeneous mass of vegetation, soil, and organic matters at various stages of decomposition) on it. Visit Khwairamband Bazaar.One of the main features of Imphal is the Khwairamband Bazaar. What makes this market different is that it is run by women. Visit Shri Govindajee Temple. The core of Imphal’s traditions, however, lies in its..

The Dancing Deer of Manipur

Sangai Deer (Rucervus eldii) also called the Dancing Deer is the state animal of Manipur. Once it was found across the Manipur Valley in abundant now now only its remaining natural habitat is found in Keibul Lamjao National Park.

Manipur – Switzerland of India: This tourist destination of Northeast India is famous for its world famous Manipuri Dance, Natural landscapes and Colorful tribes.